As many of you are aware, Eleanor Longden (a valued member of the Intervoice Board) travelled to Long Beach earlier in the year to give an inspirational talk about her recovery from overwhelming voices. Speaking alongside the likes of Peter Gabriel, Bono, inventors, ecologists and human rights activists, Eleanor received a standing ovation for her presentation.

Following this, Eleanor was asked to write a e-book about her journey to share her experiences in more detail. This e-book was released yesterday (8th August), alongside the full version of her TED talk. The talk itself has already been watched over 125,000 times – so it is really reaching out and spreading the message that people can learn to understand and live with even the most distressing voices. 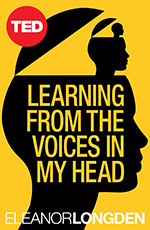 Eleanor Longden was a college freshman when she started hearing voices in her head. Diagnosed with schizophrenia and checked into a psychiatric ward, Longden spent years trapped in a nightmare of hospitals and medication

s, pain and despair. Yet she survived. Her technique: to learn to listen to her internal narrators, not reject them. Now on the cusp of finishing her Ph.D. in psychology, Longden still hears voices — and she says she wouldn’t

Part personal memoir and part medical argument, Learning from the Voices in My Head challenges society’s definition of crazy. Longden calls for new, nuanced understanding of voice hearing and urges us to see madness not as a condition, but as a process — one through which those who struggle with mental health issues have the chance to emerge with their sanity intact.

Read ‘Everything you wanted to know about voice-hearing, but were too afraid to ask’ by Eleanor on TED: http://blog.ted.com/2013/08/08/everything-you-ever-wanted-to-know-about-voice-hearing-but-were-too-afraid-to-ask/

Changing her relationship with her voices

It happened gradually — and some voices took longer to change than others. But primarily it was when I stopped attacking and arguing with them, and began to try and understand them and relate to them more peacefully. It was about putting an end to the internal civil war I mentioned earlier, because each of them was part of a whole: me! I would thank them for drawing my attention to conflicts I needed to deal with. I remember one very powerful moment, several years down the line, when I said something like, “You represent awful things that have happened to me, and have carried all the memories and emotion because I couldn’t bear to acknowledge them myself. All I’ve done in return is criticize and attack you. It must have been really hard to be so vilified and misunderstood.” There was an immensely long pause before one of them finally responded: “Yes. Thank you.”

«Previous Post
Update from Japan – July 2013»Next Post
Opinion: What does it take to be a good group facilitator?