Intervoice is happy to be one of many supporters of the 2017 International Society for Psychological & Social Approaches to Psychosis conference – Make Real Change Happen. 30th August – […]

Psychosis? Me? a new online book

The Dutch Anoiksis Patient Society, funded by the Dutch Mental Health Fund, have released a brand new version of their online Psychosis? Me? booklet. They asked Intervoice to share this with any […]

The following articles is taken from the New York Times website. See: http://nyti.ms/1W2Y2hW. The views expressed in this article do not necessarily represent the views of the Intervoice board. New […]

We’re excited to tell you about an initiative to develop Hearing Voices Networks in the West Balkans. A year ago, Slobodanka Popovic and Rachel Waddingham (London Hearing Voices Project @ […]

An Alternative Finnish Approach to Healing Psychosis In the 1980s, the psychiatric services in Finland were struggling to support people who were diagnosed with ‘schizophrenia’. 25 years later, their published […]

The experience for a “psychotic” is an overwhelming one. It’s like being thrown into a turbulent river of change and not being able to swim or being in an alien […]

Psychosis Seminars were “invented” in Hamburg (Germany) by Dorothea Buck, a psychiatric survivor of the German Nazi regime, and Thomas Bock, a psychologist lecturing at the Hamburg university. They are […]

Rufus May – The doctor who hears voices (subtitulado)

Rufus May recently posted a link to a Spanish sub-titled version of ‘The Doctor Who Hears Voices’ on Youtube. Talking about the documentary, he says: Some Spanish friends have put […]

There is a wealth of evidence linking distressing voices with adverse life events. The following is a selection of these studies and review articles. The relationship between trauma and beliefs […]

This section includes some of the key texts that share information about voice-hearing that is useful no matter what your interest in the subject (personal or professional). The voice inside: […] 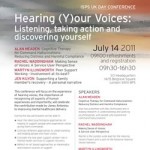 I can’t have schizophrenia – I’m a psychology student!

Things clearly weren’t right so I went to the university counselling service and told them I was hearing voices and couldn’t keep up with my work Emma Harding, from Tooting, […]